A moving memoir that proves everyone has a story to tell 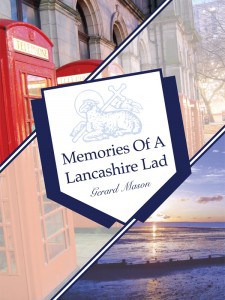 Gerard Mason was born in 1932 in Warrington when it was still part of Lancashire. His family moved to Preston when Gerard was a baby. He grew up in Hudson Street. Gerard left school at the age of 14, just before the school leaving age rose to 15. He managed his school life with honours and excelled at sports, going on to have an interesting and diverse career with jobs ranging from tea boy and soldier, retiring as a social worker in 1998. In 1962, Gerard, his first wife Joyce and their daughter Denise, moved to Deal in Kent. He married Jean in 1967 and had two more children, Ian and Amanda, who were brought up largely in Whitstable where Gerard and Jean lived until his death at the age 80 on 18 October 2012.

Memories Of A Lancashire Lad, written with the help of Your Memoir, is Gerard’s story. It is available on Kindle if you click here. Read the opening chapter now…

My first memory is sitting on my gran’s lap in her house at number 22 Hudson Street, Preston, Lancashire. She was my mum’s mother and her name was Sarah Elizabeth. I was about three and she was reading to me about trains, buses and tram cars. The trams in the book were those made in Preston at Dick Kerr’s on Strand Street. Some of them are still running today, but in Hong Kong.

She also sang me rhymes, “Ha’penny on the tram car, tuppence on the sea, fourpence on the railway and out goes she.” Another was, “Half a pound of tu’penny rice, half a pound of treacle, that’s the way the money goes – pop goes the weasel.” I seem to remember Anthony Newley making a record of these rhymes in the 1950s.

Then one day, my grandmother was gone. I was told, “Gran’s not well. She’s in bed” and “No, you can’t see her.” And that was that. I never saw her again. But I never forgot my gran. She had white hair that was always pulled back into a bun and she always wore black, including her knee-high boots that she laced with a hooked stick. I don’t remember her husband, my grandad or my father’s parents.

Also, at the age of three, I can remember sitting on the front doorstep of 10 Hudson Street. This was where my mum’s sister, Auntie Elsie and her husband Uncle Frank lived.

Previous tenants of number 10 included the Parker family one of whom was Butch Leroy Parker. The family emigrated to America in the late 1800s and Butch became known as Butch Cassidy of Sundance fame.

Sitting on the doorstep there, I watched the coalman remove the circular grate to the cellar and tip coal, from the bag he carried on his shoulder, into the hole. I was intrigued and added coalman to train driver on my list of possible jobs I could do when I grew up. I watched the coalman leave, his horse and cart rattling down the cobble stones, and then I went inside and got a cushion. Balancing it on my shoulder, I went outside and lifted the grate – I don’t know how, given its weight and my size. I then pretended to tip coal from my sack (the cushion) into the cellar. But I forgot to let go of the cushion and fell headfirst, 10 feet onto the coal below.

A while later, a passer by heard me crying and told my aunt. She said that she thought she’d heard someone crying but wasn’t sure where they were. She opened the cellar door, which was inside the kitchen and discovered yours truly with a bloodied head and two little fingers hanging off (my fingers are to this day disfigured). I was taken to the Preston Royal Infirmary where my fingers were put in splints. I decided against a career as a coalman.

At the age of four and half, I started school. My sister Joyce, who attended St Augustine’s School for Girls next door to my infant school, took me that first tearful day. At dinner time (yes, up north it’s breakfast, dinner, tea and supper – there wasn’t, and still isn’t, any room for lunch), Joyce took me home. Mother asked me how I got on.

“Well, it wasn’t all that bad, but at least it’s over now,” I told her. I didn’t understand that I had to go back in the afternoon and for 14 years after that.

St Augustine’s was a Roman Catholic school. My mother, a Catholic, insisted we were brought up that way. My dad was Church of England. He made sure we attended school and church and was quite happy when the priest called in to see us. They had different views but after a couple of glasses of beer (much to my mother’s disgust – she neither drank nor smoked) they were amicable.

I don’t know why, but after that first day, our neighbour’s daughter, Molly Axon, took me to and from school. I played up for her, dawdling and fiddling with tar bubbles in the road. Tar bubbles occurred when warm weather caused the water in the tar to rise up. You could burst the bubbles causing dirty water and melted tar to spurt out.

Molly got fed up with me and one day walked on without me. I found my way home but had to cross two main roads. I saw one bus, two cars, a few cycles and a couple of horses and carts but I made it and from then on I took myself to school with Molly’s brother who was two school years above me. His name was Phillip, which became Flip Flop and was then shortened to Flop.

Philip went on to the Catholic College but I stayed at the St Augustine’s School for Boys and in 1936, while still at Infant School, I met my lifelong friend John Hunt.

My interests at that time were football, running, cricket and playing with toy soldiers. I did everything I was supposed to do in class but I was always sports minded.

I was also interested, along with the rest of my class, in a boy who suffered from a bad chest and always had a runny nose. He always had two streams of green snot rolling down from his nostrils. These he would periodically sniff back up again but not before we had taken a bet as to which stream would reach his mouth first. Eventually the teacher realised what was distracting us and made him blow his nose on a piece of rag.

I remember being taught Religious Studies by a nun called Mother Martha. She was a popular nun and everyone loved her. Because I had rosy red cheeks and a cheeky smile to match, I became a favourite of Mother Martha. Sometimes, just before we left for the day, she would move her chair in front of her desk and speak to us. A different child was invited to sit on her lap each day and this particular day it was my turn. It must have been a Monday, because she asked, “Who went to Sunday School yesterday?”

Many hands shot up, including mine.

“You must have been to St Ignacious or St Winifred’s then,” she said.

“No, Mother, I went to St James’ Sunday School.”

Mother Martha stood up, throwing me to the floor.

“That is a Protestant Sunday School. What were you doing there?”

I started crying, “I went with my friend Alan Foxcroft who lives across the road from me,” I said. “He goes to that school.”

“Wait until Father Guagian hears about this. You will burn in hell and your soul will be destroyed.”

By this time, I was a blubbering wreck. I sobbed, “Will Alan Foxcroft burn in hell as well?”

“No. He doesn’t know any different,” she said.

I think that’s when the bolshie began to form in me.

The following week, as usual, Father Guagian paid a visit and my mother, who didn’t know that I’d gone to St James’ with Alan Foxcroft, was distraught. But my dad gave as good as he got.

“It’s a funny religion that tells a young boy he’s going to burn in hell,” he said. And I noticed that Father Guagian was not given his usual glass of beer.